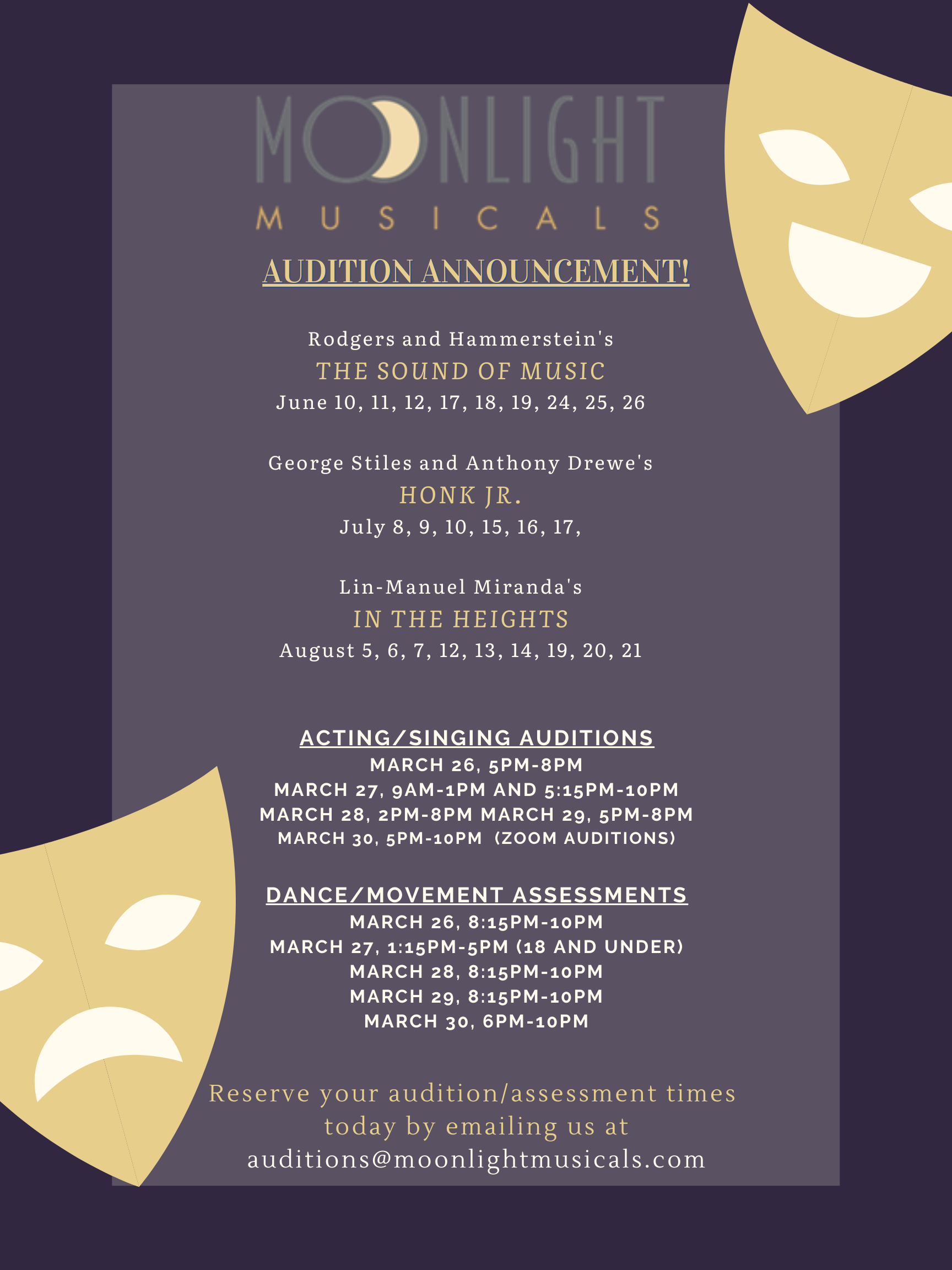 Need a pair of dancing shoes?
Discount Dance provides Moonlight Musicals’ actors with affordable dance shoes. Use this link to browse their products!

The Sound of Music

Ducklings: Beaky, Fluff, Billy, Downy are Ugly’s siblings – cute little kid types. They are among the “popular” ones in the duck yard who enjoy making Ugly feel left out. They sing as a group.

Ugly: The ugly duckling is the main character of HONK! JR. Innocent, easily confused and very impressionable, Ugly doesn’t understand why it is wrong being different. However, his insecurities melt away as his character gradually changes from a gullible duckling to a wise swan, filled with self-esteem. He is the heart and soul of the show. He must be a strong singer and good actor. – Gender: Male (Teen/Changed Voice)

Ida: Ugly’s mom. Ida is extremely protective of her son and committed to his safety. She is sweet but feisty, and she knows how to handle her husband, Drake. Ida sings several solos, and therefore she should have a strong soprano singing voice. – Gender: Female (Older Teen)

Drake: Ida’s husband. Drake is a sarcastic character. He is the stereotypical sitcom father – often shirking his parental duties. He should have good comic timing and a strong singing voice. Drake opens the show singing “A Poultry Tale.” – Gender: Male (Older Teen)

Maureen: A moorhen and Ida’s best friend. (Originally found on the moors, a moorhen is a hen that lives near the water.) Maureen genuinely loves Ida, but she can’t resist a bit of good gossip. To the little ducklings, she is the typical annoying and overly affectionate “aunt.” Maureen sings “The Joy of Motherhood” with Ida, so she should also be a strong singer. Gender: Female

The Cat: The sly, cunning villain of the show. All of the other animals are deathly afraid of him. He is manipulative, cunning, witty and above all, HUNGRY. The Cat pretends to be Ugly’s friend so he can eat him. The actor playing this role (which could be played by a male or a female) should bring a sense of fun to the character and have a good sense of comic timing. He sings a few songs, but his character allows for many of the lyrics to be “talk-sung.” Improv skills are a plus. – Gender: Any

There are many more named and ensemble roles in this show than what we just named that bring the world of Ugly the duckling to life. He encounters so many characters along the way that aid him in finding his way home but most importantly finding his true self.

A family friendly show for ALL audiences and especially children.